skip to main | skip to sidebar

I always thought it odd that magazines and newspapers ran features on the top news stories of the year in December. I mean, what if the world blew up on Dec. 31? They would have missed the biggest story of the year.

That’s why I waited until today to announce the winner of my very own “Worst Blogger of 2008” competition. The word “competition,” by the way, is merely a convention. There was no competition. I was the sole contestant, and I won, hands-down.

Certainly there are lots of bloggers out there who posted less frequently than I did or as inconsistently as I did during the past year. I don’t know all of those bloggers. But I do know me, and I was the one who selected the winner. So there.

Here’s the thing: I tend to retreat at times, especially when I’ve been in the public eye a lot. And I was in the public eye during most of 2008 when I was promoting  We the Purple. A few weeks after the election, all that publicity got to me, and I began receding into the shadows again. I’m more of an introvert than people might think.

I’m going to try not to repeat this prestigious win in 2009, but you never know. If Stephen Colbert comes calling, I may just stop blogging. For a while, anyway.

Oh, that’s me up there with all those books…some of the books I’ve written in the past 10 years. Hey, you should be impressed that I had any time at all to blog. No?

Cross-posted on all my other blogs. As if I can post three fresh blogs today. Please. I’m so out of practice. 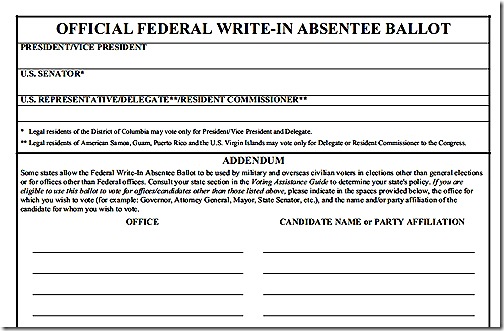 Those of you who have read We the Purple may recall that I became a political animal when I was denied the opportunity to write in the name of my choice for president in the 2000 election. I got so miffed that I voted against the current superintendent of elections that year.

Actually, the write-ins could rack up many more votes, because they are among the last votes to be counted. It’s likely that we won’t know the exact number of ballots cast for write-ins until well into the new year.

You can check out the current tally of votes for the top 25 presidential candidates—including “None of these candidates,” who weighed in at #13—at the U.S. Election Atlas web site.

“The West Wing” remains one of my favorite TV series of all time. Even though I own the entire series on DVD, I’ll watch any and every episode that turns up on satellite.

According to one of the writers, he based the character of Matt Santos—the country's first minority president—on none other than Barack Obama:

Thanks to Justin Gardner at Donklephant for bringing attention to this.

Jackie Salit on the Election


No one knows independent politics better than Jackie Salit does, and no one is a better spokesperson for independents than she is. The ever-articulate political director for CUIP and editor of The Neo-Independent offers her analysis of the 2008 presidential election and how independents affected the outcome.

Posted by Marcia Ford at 3:24 PM No comments:

I’ll be talking about the election from an independent voter’s perspective later today on "The Blog Bunker," a radio show on Sirius Satellite Radio’s Indie Talk 110 channel. My segment airs at 5:30 p.m. Eastern.

I’ve been on the show before, and I was impressed with the intelligent dialogue we had. Too often, radio hosts are argumentative rather than substantive. Not so on The Blog Bunker, which bills itself as “A cutting-edge roundtable featuring a selection of the over 100 million bloggers around the globe.”

Likely topics today include the rejection of conservatism, Obama undoing Bush policies, top priorities for Obama, how long the honeymoon will last, the post-election political climate, the impact of the Internet on the election, my reaction as an independent to the Obama/Biden victory and my experience as a poll monitor.

Give a listen and let me know what you think, okay?

Election reform racked up some wins

Like the politically active indies I know and love, I'm all about political reform, particularly electoral reform. The Huffington Post provided this roundup of electoral reform measures that voters approved on Tuesday. This is the kind of stuff that gets lost in post-election frenzy, especially after an election like this one was. Instant runoff voting, early voting, citizen-proposed initiatives and redistricting reform were among the winners. It's a short post and worth a read.
Posted by Marcia Ford at 9:47 PM No comments:

Our long national nightmare is (almost) over 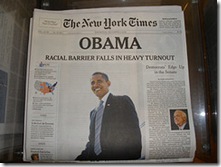 There's not much I can add to the eloquent and emotional words so many have spoken and written in an attempt to express what Barack Obama's victory means to them. What I can add is a personal perspective and a few memories of growing up during the civil rights movement and witnessing segregation first hand.

When I was a child, our family visited the South every few years. My mother was born in Georgia and had family in Florida; my produce-selling father had lived and worked in Florida seasonally and met my mother there. I don't have any race-related memories of the times we traveled by train from Philadelphia to Gainesville, but traveling by car was another story.

Car trips meant stopping in Southern states and being exposed to segregated restrooms, water fountains and restaurants. Those memories are hazy; I can mostly remember this vague sensation that Negroes, the term our family used, were lesser people, diseased and dirty and definitely to be feared. This impression didn't come from my parents. It came from simply walking the streets of Georgia or South Carolina in the 1950s and 1960s.

Even in the North, I can remember using coin-operated public restrooms (remember those?) in train stations and especially on the Boardwalk in Atlantic City, and hearing women admonish their children not to use a toilet that a Negro had just used. A child couldn't help but absorb some of that trepidation.

Then came the race riots. I won't go into that history; all I will say is that if you didn't live through that time, you cannot imagine the terror people felt.

In April of 1968, I visited Paris on a high school trip. Race riots were the furthest thing from my mind---until the day before we were scheduled to return to New Jersey. The news was all around us: Martin Luther King Jr. had been assassinated in Memphis. The fear returned. I recall looking out the window of the plane as it descended toward Philadelphia International Airport; I fully expected to see Philly and Camden, its neighbor across the river, engulfed in flames.

Today I heard someone mocking Jesse Jackson for crying as he listened to Barack Obama speak the night before. I don't care who your presidential preference was; I don't care what you think of Barack Obama---if you can’t understand why people were crying and taking to the streets in sheer jubilation last night, then you're far too cynical for me.

Our long national nightmare, the one that's (almost) over, isn't our history of racism. I'm hopeful about the future, but I'm also realistic about the deep racial divide among some segments of our society. Racism isn't the nightmare I'm referring to. The nightmare is the Bush administration. Free at last, free at last---thank God Almighty, we're (almost) free at last.

Still relevant, even after the election

We the Purple: Faith, Politics and the Independent Voter, a look at how rabid partisanship is prompting voters to go independent. Buy here.